Frink Park, as with Colman Park and Leschi Park, is located within a steeply sloped area referred to in Olmsted’s 1903 report as the “Rainier Heights Landslide Section.” In his 1903 report, John Charles proposed an ambitious undertaking to acquire this entire length of steep slope for park purposes, warning of the land’s unsuitability for subdivision development: “Houses will probably continue to be moved gradually on to adjoining land owned by someone else, and there will be no end to the trouble, expense and inconvenience due to the continuation of the slide if it is allowed to become occupied by houses. . . . On the other hand, the movement of the land would be of small consequence if the ground is turned into a public park.” This area is generally east of 31st/32nd Ave and extends approximately from Plum Street on the south end to Yesler Way to the north. Olmsted also proposed a “crestline parkway” that would run along the top of this slope and provide occasional views to Lake Washington and mountains beyond.  This ambitious plan was never realized, but selected parcels within this area were either donated to or purchased by the city for parkland.

Frink Park, donated by J.M. Frink in 1906, occupies a wooded ravine with a stream channel winding through. The Olmsted Brothers laid out the curving alignment of Lake Washington Boulevard to fit the slopes as it winds through this park, and they created a small waterfall as a focal point where the boulevard spans the ravine. The firm also created a network of paths through the park, benches and pools.  Their design proposed a view overlook at Jackson Street and 31st Ave, but these views to Lake Washington and the Cascade Mountains have since been obscured as the native forest has matured. 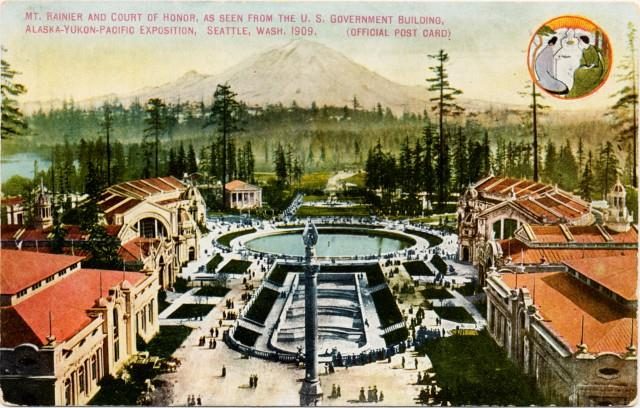