Olmsted Brothers in 1908 described “Forest Park” as “a densely wooded ravine…valuable for its scenic effects, and for recreation purposes.” Schmitz Preserve was donated to the city in pieces between 1908 and 1912. The most generous chunk came from a German immigrant/banker/realtor named Ferdinand Schmitz, who served on the park commission during those years. As Schmitz saw how rapidly the great forest was disappearing, he sought to preserve part of it in its natural state. He donated his land “to be used perpetually…for park purposes…in order that certain natural features be preserved.”Even Schmitz’s land had not been completely untouched by logging, though. Some huge stumps in the park still show deep notches hacked high above the ground for the “spring-boards” on which axe men would stand to avoid having to chop through the lower root crown, the thickest and hardest part of the tree. After 1908, however, the new park rapidly gained popularity as a quiet complement to the West Seattle park complex.

Olmsted developed design drawings for Schmitz Park in 1909 – the design included a shelterhouse and pergola, “to be of rough-hewn timbers stained brown and overgrown with vines,” at the terminus of Schmitz Boulevard within the northern reaches of the park. Olmsted also laid out a trail system, scenic pool and waterfall within the park.

Except for the paved entrance and a parking lot at the northwest corner, the park has remained largely untouched ever since. 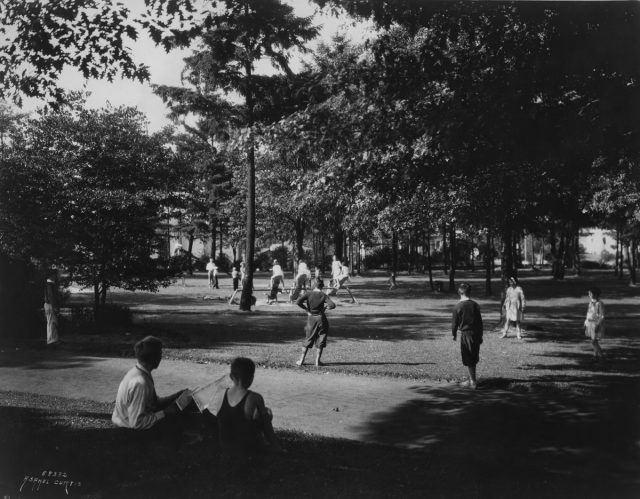